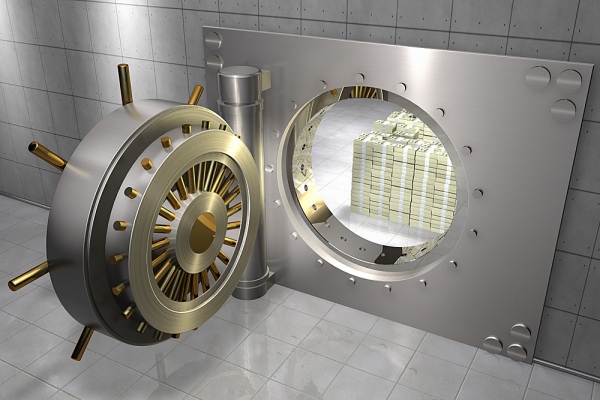 04/20/2017
A few days ago I was asking God about my financial situation. I asked Him if the situation I was in was His will. To my surprise, I heard Him say, “NO, it’s not My Will”… So, I started to get excited because I instantly knew something demonic was behind it, and if that was true, that meant “I could get it removed”…
So I began to ask God, What was stopping the Flow of my finances and I heard Him say.. “Occult members have your finances in a vault with 1000 chains on it”……. I said WOW, 1000 chains….lol They really wanted to keep my finances locked away….lol
So, me and the Lord started the process to get them removed. As I asked the Lord to remove the “1000 chains” .. I begin to see a Vision of the chains being removed. I then saw the doors of the vault (like the picture I posted) being turned and opened. In this vault, I saw bars of gold stacked all the way to the top of this vault… WOW, it was unreal. They had so much money locked up!!! I started to ask the Lord to remove all the money from the vault and to put it, in a safe place. I saw Him remove it, and then the vault was empty.
Lastly, I asked the Lord to release Fire from Heaven and destroy the vault completely, and I saw that He did…
Yesterday, as I was chatting with our Team in our Facebook Chat group, they started talking about being attacked with financial issues… So I started to ask God if their Finances were being hindered….. He said “Yes”… So, Then He told me, some had “webs” hindering their money from flowing, some had the same vaults, some had padlocks and some had demonic covenants to their finances that needed to be “VOID”….
So, me and the Lord spent sometime on each person (I did my family members also) and we got everything removed….
I have already saw my finances turn around. Now things can flow freely….No More Bondage!!! If you guys are dealing with something stopping the Flow of God’s blessings to you and your family.
We would love to set up a session with you, to get it removed.
http://FreedomNationTeam.com
JOIN OUR FACEBOOK GROUP PAGE
#BlessingsCanFlowFreely

#1 Strategy of the Enemy